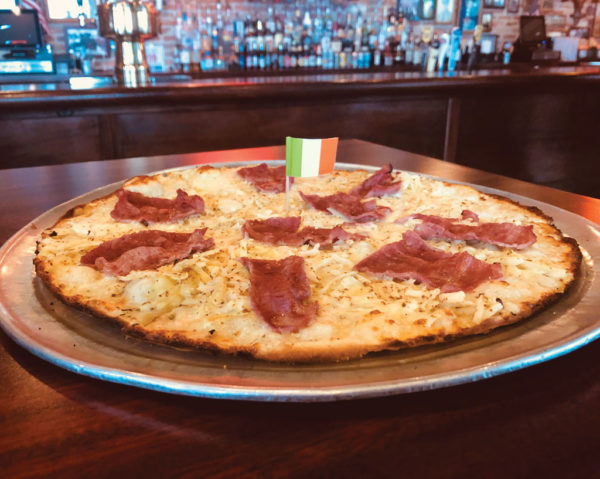 Colony Grill, Clarendon’s new family-friendly tavern, known for its gracious hospitality and famous “hot oil” bar-style pizzas, will serve a special corned beef & cabbage “Bar Pie” on St. Patrick’s Day.  From Friday, March 12 through Wednesday, March 17, from 11:30 a.m. until closing, the restaurant will pay tribute to its Irish roots by offering its one-of-a-kind, thin-crust pizza topped with corned beef and cabbage. Colony Grill’s signature pizzas are priced at $9.95 with additional toppings priced at $1.75 each. The Corned Beef & Cabbage Pizza is priced at $13.45. In addition to the new location at 2800 Clarendon Boulevard, Colony Grill has multiple locations across Connecticut and New York.  This pizza special offer applies to dine-in and carryout orders.

In 1935, Colony Grill opened in an Irish immigrant neighborhood in Stamford, Connecticut.  Since then, Colony Grill has become famous for what is now its only menu offering: a one-of-a-kind, thin-crust pizza that is best served with its signature “hot oil” topping – a spicy, full-of-flavor, pepper-infused creation which can be ordered with any other combination of toppings. The original owners of Colony Grill were Irish American, but they employed Italian and Eastern European chefs throughout the Great Depression. These men proudly wanted bar patrons to try the pizza recipes of their homelands but needed a way to fit a pizza tray on Colony Grill’s narrow bar top.  The solution: the “Bar Pie,” a thin crust pizza that is smaller in diameter than a traditional pizza with a thin layer of cheese and sauce so slices can be easily managed with one hand. The local Irish crowd – and anyone else who visited Colony Grill – seemingly could not get enough of this unique pizza.  Eventually, across the decades, the hot oil bar pie became so popular that all the other Colony menu items faded away, as did the need for a grill.  But the name Colony Grill remains as a link to their heritage.  The restaurant has been named one of “56 Greatest Old-School Pizzeria’s in America” by The Daily Meal and one of the “Top 101 Pizzas in America” by TripAdvisor.