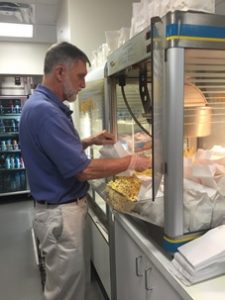 Patrick McDonald is blind but that doesn’t stop him from serving as the manager of a snack facility at the Pentagon in Arlington, Virginia that grosses more than $1 million in annual revenue. McDonald is proud to continue his family’s strong tradition of military service. Both his father and brother had military careers, in the Marine Corps and Air Force, respectively.

Though retinitis pigmentosa, a (frequently) hereditary condition that causes gradual blindness, prevented McDonald from enlisting, he has made it his life’s work to ensure that those who defend our country get the fuel they need to meet the challenges they face on a daily basis. Prior to managing his Pentagon food business, McDonald spent five years running a deli and cafe at the Army Material Command Center in Arlington.

“There’s a tremendous satisfaction that comes from working with our military every day,” McDonald says. “They are special group of people who treat everyone with respect and dignity.”

To feed the people who famously get more done by 9 a.m. than most others do all day, McDonald’s snack stand opens at 5 a.m. Unsurprisingly, the foot traffic starts early and energy drinks are one of the most popular items. While demand for more healthy options, like fresh cut vegetables, have gained popularity, hot buttered popcorn remains a perennial favorite (yes, even for breakfast).

For McDonald, the freedom of being an entrepreneur comes with the responsibility for properly managing staff, and being hands-on with every aspect of his business, regardless of his lack of sight.

“I may have an impairment, but I really don’t view it as an impediment,” says McDonald. “Whatever you want to do, it’s really up to you as an individual to work hard. Sure, there will be frustrations, but it comes down to patience, persistence, and perseverance.” McDonald is now looking forward to being part of a team that is putting together a proposal to provide food service to all the U.S. Marine  Corps bases on the East Coast.