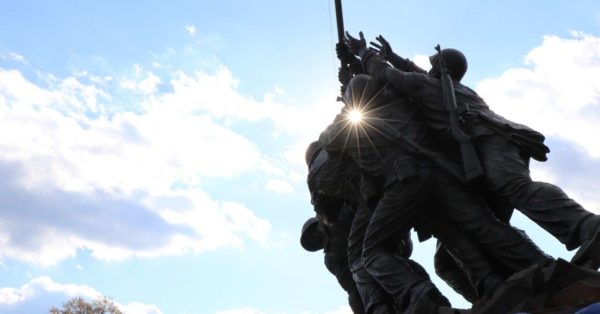 This Sunday, Feb. 23, marks 75 years since brave Marines raised the American flag over Mount Suribachi on Iwo Jima. The U.S. Marine Corps War Memorial, which depicts the historic moment, has been completely rehabilitated. Two new videos launched today tell the stories of the historic flag raising and the sculpture itself.

The rehabilitation of the sculpture and surrounding parkland, the specially designed onsite exhibits and the new videos were made possible through a generous $5.37 million donation from businessman and philanthropist David M. Rubenstein to the National Park Foundation. Rubenstein made the donation to honor his father’s service in the U.S. Marine Corps.

David M. Rubenstein said, “As the passage of time takes away the brave members of the Marine Corps who fought for our country, the importance of honoring their lives and preserving our history increases. The conservators and workers did a wonderful job returning the U.S. Marine Corps War Memorial to its original beauty. I am humbled to be a part of refurbishing the memorial and honoring those who gave the last full measure of devotion for America.”

“Thanks to David Rubenstein’s ‘patriotic philanthropy,’ visitors will notice brighter, re-gilded engravings on the sculpture’s pedestal, a clean, waxed sculpture, and new lighting and landscaping,” Superintendent Charles Cuvelier said. “In addition to a beautiful memorial and grounds, we are excited to release two new videos –Raising the Flag and The Story Behind the Statue–both made possible by Mr. Rubenstein.”

The videos, available to watch online or download, tell the stories of the flag raising on Mount Suribachi and the creation of the memorial. They are ideal for families as they prepare for a visit, tour companies to play for their customers, or simply to learn more about a historic moment and the memorial that followed.

“Mr. Rubenstein’s transformative gift is a shining example of how the generosity of one person can preserve our shared history and heritage for present and future generations,” National Park Foundation President and CEO Will Shafroth said.