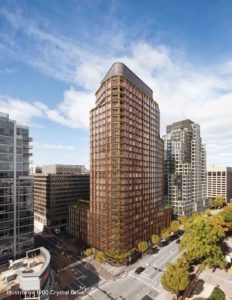 JBG SMITH, a leading owner and developer of high-quality, mixed-use properties in the Washington, DC market, announced today that it has secured all the necessary approvals from Arlington County to develop two residential towers at 1900 Crystal Drive in National Landing.

The proposed development at 1900 Crystal Drive comprises approximately 811 residential units and 40,000 square feet of street-level retail across two new mixed-use buildings. The proposed 27-story southern tower encompasses 472 apartments, while the 26-story northern tower includes 339 apartments. In addition to a private rooftop and green spaces for residents, the approved plan calls for a retail-anchored shared street, a central park, and activated retail via an alley similar to that of Blagden Alley in Northwest DC.

In 2018, National Landing was chosen for Amazon’s new headquarters, and JBG SMITH was named the developer, leasing agent, and property manager for the project. Amazon plans to bring as many as 37,850 high-paying jobs to the market over the next ten years, and it is already occupying space at several other JBG SMITH-owned commercial office buildings.

“With Amazon employees already arriving in the area and many locals who want to live in a vibrant downtown, we are thrilled to reach this important milestone in National Landing’s ongoing development and transformation,” said Tony Greenberg, Executive Vice President of Development at JBG SMITH. “New apartments and street-level retail are essential for cultivating a thriving 18-hour environment where people can walk from their home or office to their favorite restaurants and amenities.”

The approved proposal includes a variety of site plan improvements such as enhanced streetscapes, a grand staircase connecting to a central park, public bike facilities, and more, all of which will benefit the entire community. At 300 feet tall, the buildings, designed by renowned architect Cook Fox, will be a striking addition to the National Landing skyline.

While all entitlements are currently in place, JBG SMITH will thoroughly evaluate overall market conditions, construction costs, and other capital allocation opportunities prior to commencing construction of 1900 Crystal Drive.

In addition to the Amazon project, JBG SMITH is currently constructing Central District Retail, a 109,000 square foot entertainment and shopping destination that will serve as the retail heart of National Landing.  The retail components of Central District Retail and 1900 Crystal Drive are expected to deliver almost 150,000 square feet of street-level retail featuring an Alamo Drafthouse Cinema, specialty grocer, restaurants, bars, and other experiential offerings.