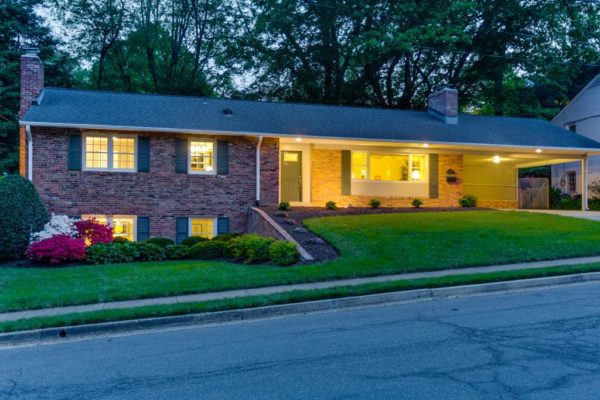 Located in “Rivercrest” and across the street from close childhood friends the Murray’s, sits Mr Schmidt’s house. Like the current owners, Mr Schmidt took great pride in this mid century modern 1954 ranch. Classic features like the antique used brick exterior and its sleek lengthy expanse from one end to the other. Also, a 4 foot wide overhang that provides visitors shelter from inclement weather and a 24 foot wide carport which allows natural light to enhance its interior remain practical and architecturally pleasing features still today. A neighbor and friend Jay Wagner stopped by my open house and told me he remembered seeing a sign many years ago that advertised “Rivercrest, starting in the $30,000’s”. and dreamed of one day owning one. I recall wrestling over a ball with one of the Murray kids in Mr Schmidt’s yard and getting scolded as we were “creasing the grass”. Maybe not so fastidious as the previous owners, the current homeowner have paid close attention to every selection or modification to uphold Mr Smith’s high standards for 3732 N Nelson St. To say this home is turn-key is an understatement, however this immaculate home has been renovated thoughtfully by the current owners to include Kitchen 2001, New roof 2005, New HVAC 2006, three bathrooms 2007, New patio 2011, Windows & Exterior doors 2012 and Appliances 2016. One level living is really not so accurate since this home features two levels and nearly 3300 sq feet of living space. One level is referring to the fact that one can enjoy everything on the upper level including carport, bedrooms, baths, kitchen, living and dining rooms, screen porch without the hassle of stairs. As the many baby boomers are increasingly preferring to age in place vs moving outside this area, this floor plan becomes increasingly popular.

Two personal favorites is the huge daylight walkout 24 x 17 recreation room w/ fireplace and the fabulous 20 x 16 screen porch overlooking back yard, the same spot Mr Smith sat ready to catch little trouble makers like Kevin Love who belonged on his own side of Gulf Branch in Bellevue Forest. I assume the path between my house on N Peary St and the Murray’s house on N Nelson St has long since grown over as this was 35 years ago, but the memories are still ever present in my mind. Come check out this pristine classic while its still available Sunday May 21st 1-4 pm OPEN HOUSE and see for yourself the many updates the current owners have made that even Mr Schmidt would of approved.