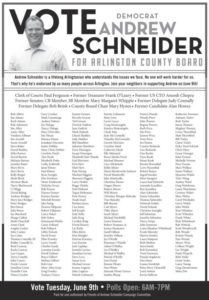 “I am proud of the support that my campaign has garnered through the four months I’ve been running.  This list and the many more Arlingtonians whose doors I’ve knocked on, talked with at Farmer’s markets, and communicated with over email and the phone, are what inspire me every day to work so hard on this campaign.  I can’t wait to serve the community that I was raised in and that I care about so much,” said Schneider.

Andrew Schneider, 40, is seeking the Democratic nomination for one of two open seats on the Arlington County Board, in the June 9th primary. A lifelong Arlingtonian, Andrew is a graduate of Arlington public schools, the College of William & Mary, and earned his MBA from the University of Maryland. He works for the College of William & Mary working to engage the 20,000+ alumni who live in the Washington area. He also currently serves as the President of the Yorktown Civic Association and Vice Chair of Community Residences. He lives in the Yorktown neighborhood with his wife, Susan, and their children, Alan and Elizabeth.