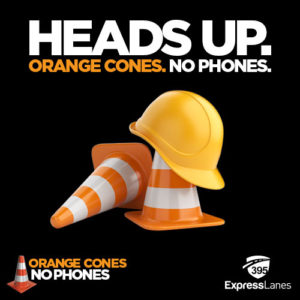 WASHINGTON, May 10, 2018 — A survey of more than 1,000 Washington, D.C., area drivers who travel the Interstate 395 corridor shows that motorists self-report engaging in a number of distractions while behind the wheel.

Following the survey findings, Transurban, operator of the 495 and 95 Express Lanes, and the Virginia Department of Transportation announced today the launch of a 2018 “Orange Cones. No Phones.” campaign to reduce distracted driving within the 395 Express Lanes work zone.

“We focus on safety on the Express Lanes and in the 395 Express Lanes work zone every day,” said Jennifer Aument, president, North America, Transurban. “We need the help of drivers to create a safer work zone to ensure on-road construction crews and other travelers are getting where they need to go safely.”

The top three cellphone distractions reported among D.C. area motorists were using a phone to talk, checking GPS or travel planning, and reading a text message. Despite growing research that finds holding a conversation on a cellphone is still dangerously distracting*, more than half of area drivers report feeling unconcerned about using their phones to talk while behind the wheel. The “Orange Cones. No Phones.” campaign aims to improve safety by reducing distracted driving within the 395 Express Lanes work zone.

“In 2017, distracted driving accounted for almost 25 percent of traffic fatalities,” said Shannon Valentine, Virginia Secretary of Transportation. “In work zones alone, VDOT recorded 2,666 crashes resulting in 1,329 injuries and 12 fatalities. The lives lost were completely preventable. We must continue to engage the public about the dangers of distracted driving. The ‘Orange Cones. No Phones.’ campaign is an important component to help deliver safety on our roads and reduce incidents.”

“As the first responders to many of these crashes, we understand the serious consequences of distracted driving,” said Colonel Gary T. Settle, Virginia State Police superintendent. “Safety is our number one concern, and we are pleased to support this program to educate and increase awareness with drivers across the region to help cut down on distracted driving.”

“With so many drivers on the roads around the Washington area admitting they are distracted while driving, there is a huge safety concern for everyone on the roads,” said John Townsend, spokesperson for AAA Mid-Atlantic. “Holding a conversation is still a distraction, and our hope is that this program will help drivers become more aware of the dangers of distracted driving, especially around work zones on our highways, and take active steps to make better choices.”

Checking a cellphone or sending a text using voice commands at seemingly safe moments such as when there is a lull in traffic or the car is stopped at an intersection also has been found to be dangerous behavior. According to a Study from the AAA Foundation for Traffic Safety, these types of potentially unsafe mental distractions can affect motorists’ attention for as long as 27 seconds, which is equivalent to traveling the length of nearly three football fields at a speed of 25 miles per hour.

As part of the “Orange Cones. No Phones.” campaign, the partners are implementing a number of tactics supported by the study’s findings, industry data and best practices to improve safety for all drivers:

The 395 Express Lanes are scheduled to open in fall 2019. The Lanes will extend the 95 Express Lanes eight miles north to the D.C. line and help get people moving in the I-395 corridor. The Lanes will increase capacity by adding another HOV lane, creating three reversible lanes on I-395. As part of this project, Transurban will provide $15 million in transit funding per year to enable multimodal solutions in the corridor.

** The online survey of 1,003 Washington, D.C., area drivers who travel I-395 at least monthly was conducted by international market research firm YouGov between March 21 and March 28, 2018.

About the Express Lanes

The 495 and 95 Express Lanes operate on I-495 and I-95, providing drivers with faster and more predictable travel options in Northern Virginia. Together, the 495 and 95 Express Lanes create a region-wide network of free-flowing lanes for over 40 miles from the Dulles Toll Road to Stafford County. Delivered through a public-private partnership between the Virginia Department of Transportation and Transurban, the Express Lanes give drivers reliable travel choices on two of Northern Virginia’s most congested roadways. For more information, please visit ExpressLanes.com.

For over twenty years, Transurban has improved the quality of life for customers by providing innovative solutions for their transportation needs. Transurban is a pioneer of the public-private partnership (P3) managed lanes concept in the United States. The North American business was among the first to implement major transportation infrastructures in the Virginia region. Our Express Lanes network features industry-leading tolling and traffic management systems on more than 40 miles of managed lanes across the 495 and 95 Express Lanes. Transurban was one of the first to use a number of innovative financing and technology strategies in the development of major toll road projects.