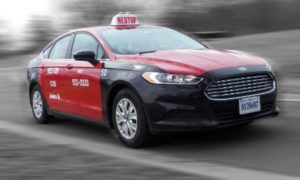 The owner of one of Northern Virginia’s most recognizable companies, Red Top Cab of Arlington, will be honored today with a Lifetime Achievement Award, the highest honor from one of the world’s oldest and largest transportation trade groups.

Cheered by 1,000 industry peers from around the world, Neal C. Nichols will accept the award on Oct. 29 by Taxicab, Limousine & Paratransit Association (TLPA) at the trade group’s 97th Annual Convention and Trade Show, held this year in Las Vegas. The annual event is the largest gathering of the for-hire transportation fleet industry in the world.

“Neal has built a fantastic brand, and has shown unwavering commitment to excellence in our industry,” said Alfred LaGasse, CEO of the TLPA. “He’s also a major force behind so many things that make a difference in people’s lives, from helping people with disabilities to curbing drunk driving.”

Nichols was one of the first U.S. operators to add accessible vehicles into his taxicab fleet and was also one of the first taxi company owners to build a fleet of greener, cleaner hybrid cabs. He is also a charter member of the Virginia Taxicab Association, in which he still plays an active policy and financial role.

A community leader outside of his business, Nichols is a long-time supporter of SoberRide, a program that provides free, safe transportation during holidays. He was inducted into the Arlington Chamber of Commerce’s “Best Business Hall of Fame” in 2011. Red Top has been recognized with an ABBIE for Arlington’s Best Business of the Year, and Washingtonian magazine readers named Red Top Cab the “Best Taxi Service” in the DC metro area. The company also supports numerous community initiatives, including Capital Hospice, Wounded Warriors and the Senior Olympics.

Nichols has six children and has been blessed with 17 grandchildren. A long-time pilot, he is certified in both single- and twin-engine aircraft and still maintains an airplane in nearby Leesburg, VA. He enjoys spending time on his small farm where he raises beef cattle and grows corn and hay.