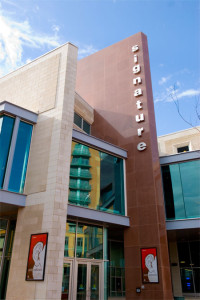 “I’ve been fortunate enough to work with Julia Jordan and Adam Gwon numerous times and have known Sheri Wilner for many years, so I couldn’t be more excited for this collaboration,” said director Joe Calarco. “Cake Off is hilarious and also fearless in its exploration of gender politics.”

Cake Off is presented as part of the Women’s Voices Theater Festival, which is dedicated to featuring new work by female playwrights and highlighting the scope of plays being written by women. Signature is proud to be an originating theater sponsoring the two-month festival, which boasts participation from more than 50 theaters throughout the Nation’s Capital region.

“As one of the originators of this important festival, Signature is producing three projects with women writers this season – and we’re especially excited to be producing one of the few musicals in the festival with Cake Off,” said Signature Theatre Artistic Director Eric Schaeffer.”We’re all committed to this cause and I couldn’t be more proud of the effort at Signature Theatre and in this city to bring female voices to the stage.”

It’s the 50th Annual Millberry Cake Off. The legendary jackpot: one million dollars for the best homemade sugary delight. After a chilly pre-heating, hardy contestants Paul and Rita don their aprons, strap on their oven mitts and square off. Armed with whisks, bowls, knives and eggs, the two engage in an increasingly ludicrous all-out brawl – and only one can remain standing when the timer dings.

Cake Off is based on an original play by Sheri Wilner. The New York Times called Wilner’s playa “laugh-out-loud satire on gender roles…barbed, witty, thoughtful, giggle and snort inducing.”

Sponsored by Wesley Pickard and Jeanette Studley. New work at Signature Theatre is sponsored by The Reva and David Logan Foundation.

Signature’s 2015/16 season is partially supported by the Virginia Commission for the Arts and the National Endowment for the Arts.

Performances run Tuesday through Sunday evenings, with matinees on Saturday and Sunday.Tickets start at $40. Single tickets are available in person at the Signature Box Office at 4200 Campbell Avenue in Shirlington, by calling the Signature Theatre Box Office (703) 820-9771, and online at www.sigtheatre.org.

Sign up now for priority ticket offers at www.sigtheatre.org

Signature Theatre is located at 4200 Campbell Avenue (22206) off I-395 at the Shirlington exit (#6).  After the exit, blue Signature signs mark the way to the Theatre.  Free parking is available in two adjacent public garages.  For directions visit http://www.sigtheatre.org/plan-your-visit/directions/

Cake Off at the Tony-winning Signature Theatre plays for 8 weeks, running September 29 through November 22. Tickets start at $40. For more information, visit www.sigtheatre.org.