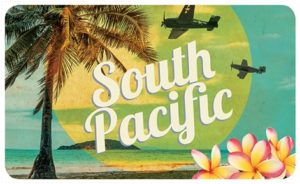 Arlington, VA (January 27, 2016) – Chalice Theater celebrates its 20th anniversary with Rodger and Hammerstein’s Pulitzer-prize winning musical, South Pacific. The story revolves around prejudice, war, and romance on an American military base during the Second World War. Chalice’s production, directed by Walter Ware III, casting director of Arlington’s Signature Theater, will explore these themes as they reside in the original script, and as they remain with us today. The show features such Broadway favorites as, “There is Nothing Like a Dame,” “Bali Ha’i,” “Some Enchanted Evening,” and “You’ve Got to Be Carefully Taught,” and an intergenerational cast (ages eight to eighty) of almost forty players.

After two weekends of sold-out performances, tickets remain for the final weekend shows on March 11, 12 and 13. Ticket prices are $20 for general admission, $15 for seniors and students. Tickets are available online at:  http://chalicetheatresouthpacific.eventbrite.com

Chalice Theatre is located in the Unitarian Universalist Church of Arlington at 4444 Arlington Boulevard, Arlington, Virginia.

Chalice Theatre is a community theatre program of the creative arts ministry of the Unitarian Universalist Church of Arlington. Chalice Theatre was founded in 1997 by UUCA, in collaboration with The Keegan Theatre’s artistic director Mark A. Rhea, to offer intergenerational experiences in the performing arts which explore values and questions at the heart of liberal faith and live out the mission of UUCA to Connect, Grow and Serve. In its eighteen year history, Chalice Theatre has presented nineteen musicals and numerous staged readings and plays. Previous musicals have included, Oklahoma, Seussical, Into the Woods, and Fiddler on the Roof.

About the Unitarian Universalist Church of Arlington

Unitarian Universalism is a liberal faith which draws inspiration from many sources (religious, spiritual and humanist,) in a free and open search for truth and meaning. The Unitarian Universalist Church of Arlington (UUCA), at its present location since 1948, is a place where anyone and everyone can Connect, Grow, and Serve. UUCA is a faith community that promotes love, reason and freedom in religion; a community that works to build a more just and peaceful world; a community that finds inspiration in music and the arts; and a community that honors and respects the beauty of the earth. UUCA is a diverse community of spiritual seekers guided by a covenant of mutual respect regardless of sexual orientation, race, age, class, or ability.

For more information about UUCA, go to www.uucava.org