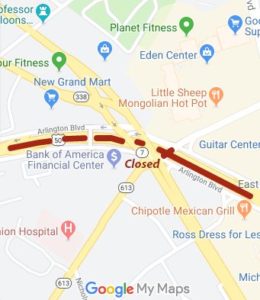 Drivers can expect major delays and are advised to use alternate routes.

The work is part of the Wilson Boulevard over Route 50 bridge rehabilitation project. After the weekend closure, drivers can expect single-lane closures on Route 50 and the eastbound Wilson Boulevard bridge until late fall. The project is scheduled for completion this winter.