The video was reportedly shot on Dec. 7, when 40 cars had their tires slashed in the neighborhood between 12:30 and 7:00 a.m. It was the second tire slashing spree within a month in the neighborhood after 36 cars were found with slashed tires on Nov. 18.

The suspect “has a unique walk” according to the ACPD Twitter account. Police are asking anyone who recognizes the slashers to come forward and assist with the investigation. The police department’s non-emergency number is 703-558-2222.

In the above video, the suspect can be seen approaching an SUV parked in a residential driveway, appearing to stick a sharp object in a tire and walking down the street in a matter of seconds. 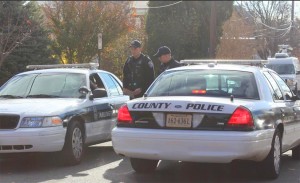 A number of vehicles in Pentagon City were discovered with their tires slashed on New Year’s Day.

According to police, an unknown vandal or vandals slashed tires on six vehicles in the 400 block of Army Navy Drive between 5:00 a.m. and 8:50 a.m. on Wednesday. There is no suspect description.

This is the latest in a string of tire slashing sprees that has plagued Arlington over the past several months. Hall’s Hill was hit twice, first in November when 36 vehicles were affected and again in December when 40 cars were vandalized. In July, police investigated a string of slashed tire incidents on 16 vehicles — mostly Toyota Priuses — in the Cherrydale, Waverly Hills and Barcroft Park neighborhoods. About two weeks later, in August, 10 vehicle owners found their tires slashed in the Arlington View neighborhood.

Thus far, police have not arrested any suspects in any of the tire slashing incidents.

Anyone who may have seen suspicious activity or who may have information about the vandalism incidents is asked to call the police non-emergency number at 703-558-2222.

Dozens of cars parked in the Hall’s Hill neighborhood had their tires slashed over the weekend in the same area where a similar incident occurred last month.

Police say 40 cars were hit sometime from 12:30-7:00 a.m. on Saturday, December 7. The first vandalized car was discovered at 7:00 a.m. that day and dozens of others were found as residents emerged from their homes.

This is the same neighborhood struck last month when 36 vehicles were discovered with slashed tires. Some of the vehicles vandalized on Saturday had been hit last month as well.

Police do not have any suspects so far but the investigation is ongoing.

“We are aware of the continued target of that general area and without going into specifics about the tactical strategy, we will be deploying resources in that area,” said Arlington County Police Department spokesman Dustin Sternbeck.

Anyone who may have seen suspicious activity in the Hall’s Hill neighborhood or who may have information about the vandalism incidents is asked to call the police non-emergency number at 703-558-2222.