Aspiring to be in the top 20% of Arlington households by income? You’ll need to make more than three times what someone in Cleveland earns to crack the same top quintile.

Arlington is No. 4 among the 100 largest cities and Census-Designated Places in the U.S. in terms of income needed to be among the top earners, according to new rankings from the website SmartAsset.

The entry level for the top 20% of working households in Arlington is $216,605 in annual income, SmartAsset reports, based on Census data.

The top 3 on the list, ahead of Arlington, are all in the Bay Area:

The rankings also highlight income disparities, even in prosperous cities. 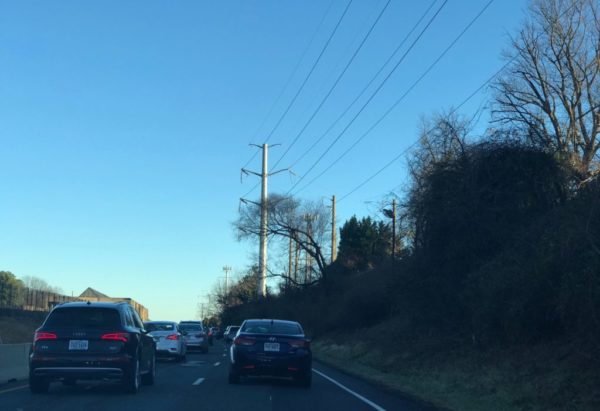 Icy Conditions on N. Glebe Road — The northbound lanes of N. Glebe Road are closed at Military Road “for an unknown amount of time” due to icy conditions. [Twitter]

County Board Member is Pregnant — Arlington County Board Chair Katie Cristol and her husband Steve are expecting their first child in May. [Twitter]

Growing Number of $200K+ Earners in Arlington — “If there’s one place in America that doesn’t need a helping hand from Jeff Bezos, it could be [Arlington and the D.C. suburbs]. The Washington commuter area is home to four of the top 10 (Nos. 2, 3, 5 and 6) fastest-growing census tracts of high earners.” [Bloomberg]

New research suggests that people living in Arlington’s poorest neighborhoods also have the fewest opportunities to lead healthy lives when compared to other communities throughout the entire D.C. region.

A study commissioned by the Metropolitan Washington Council of Governments and conducted by researchers at Virginia Commonwealth University show that many of Arlington’s most diverse neighborhoods with the lowest median incomes, such Columbia Heights, Nauck, Douglas Park and Buckingham, also scored the lowest in their measure of “health opportunities” across metropolitan Washington. The results closely mirror a previous study’s findings that people living in many of the same neighborhoods lack economic opportunities as well.

The researchers developed a “Healthy Places Index,” known as HPI, to evaluate not only health outcomes (like life expectancy) in each community, but also to understand whether people have the opportunity to be healthy based on where they live. That includes evaluations of factors like air quality, access to healthcare, housing affordability, the availability of public transportation and education levels.

The study applies that index to neighborhoods across the D.C. area, examining communities using granular Census tract designations to detect patterns within counties and cities in the region. Though the group found that the overall health of the 4.5 million people living in the District and its suburbs is “excellent” and “well above the national average,” they also uncovered “islands of disadvantage” within even wealthy localities like Arlington.

Even though some of the more affluent, higher educated areas of the county rate quite highly in the study’s measure of health opportunities, others rank among the lowest in all of Northern Virginia. The researchers identified the Columbia Heights neighborhood, just off Columbia Pike, as having one of the “the lowest HPI scores in the region,” noting that about 23 percent of adult residents there live in poverty. Buckingham, located along Route 50, also posted poor HPI scores, and the study noted that its residents have a median income of about $38,125 annually.

“The researchers found stark contrasts in socioeconomic and environmental conditions in Northern Virginia, often between neighborhoods separated by only a few miles or blocks,” the VCU academics wrote. “As was observed elsewhere in the region, people of color were disproportionately exposed to adverse living conditions.”

To illustrate those points, the study compared McLean — one of the wealthiest and whitest communities in the area — to Columbia Heights. The former ranked among the top-scoring neighborhoods in the region on the HPI, a far cry from Columbia Heights’ own performance.

While the researchers identify a whole host of factors that could be contributing to such a split, they also stress that it is impossible to ignore the impact of “institutional racism” in understanding why such a divide exists between the races when it comes to health opportunities. They note that discriminatory housing and economic policies mean that people of color are “more likely to live in racially and ethnically segregated neighborhoods that suffer from decades of disinvestment,” which can have a whole host of negative consequences for their health.

“As a result, neighborhoods of color often lack access to affordable high-quality housing, stores that sell healthy foods, green space, clean air and clean water,” the researchers wrote. “These communities are often targets for fast food outlets, tobacco and alcohol marketing and liquor stores. These conditions affect not only the health, economic opportunity, and social mobility of people of color, but they also weaken the health and economy of the entire region.”

Accordingly, the study recommends approaches recognizing that history to officials sitting on the Council of Governments, as they try to craft a response across the region.

“Real solutions require targeted investments in marginalized neighborhoods to improve access to affordable, healthy housing as well as affordable transportation, child care, and health care (e.g., primary care, dental care, behavioral health services),” they wrote. “Everyone benefits from this approach, not only the residents in low-income neighborhoods and communities of color, but also the entire regional economy. Economic and racial inequity saps the strength of the economy. Everyone pays a price for inaction: persistent poverty and social isolation fuel discontent, unhealthy behaviors (e.g., drug addiction), crime, and violence.” 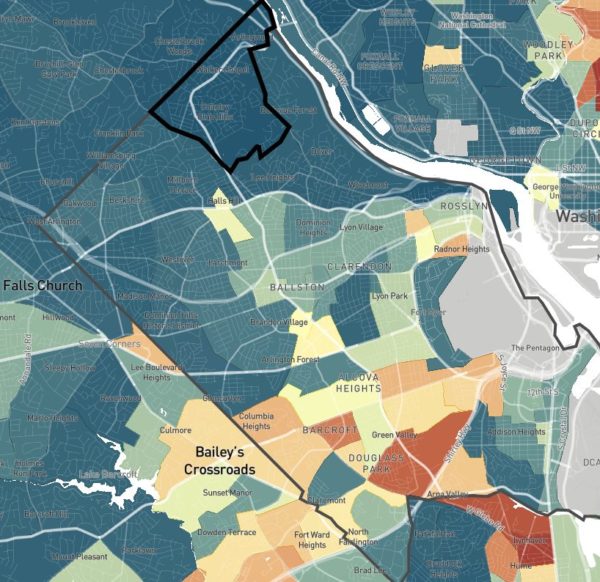 (Updated at 6 p.m.) Striking new research reveals that where children are born in Arlington can have a decades-long ripple effect on their futures, with kids in the county’s more ethnically diverse neighborhoods growing up to make less money and end up in jail at higher rates than their counterparts.

The analysis, compiled by the Census bureau and a team of academic researchers, shows that children born to a family in a wealthy, predominantly white North Arlington neighborhood earn tens of thousands of dollars more, on average, than kids from a more diverse, lower income South Arlington neighborhood. Incarceration rates generally follow the opposite pattern.

These effects largely persist regardless of a child’s race, or the income level of their parents, mirroring results researchers found around the country in creating this new “Opportunity Atlas.” The interactive map combines anonymized data on 20 million people born 30 years ago with granular Census tracts, in order to provide a glimpse of the gaps in opportunity across different neighborhoods nationwide.

Researchers are still sorting out the exact reasons behind these disparities — everything from the quality of local schools to an area’s employment rate could help explain the variations. But officials and public policy analysts increasingly view this data as a key way to guide where government intervention might be most needed to lift people out of poverty, particularly when evaluating which neighborhoods have borne the brunt of decades of racially discriminatory policies.

In Arlington, the atlas helps provide concrete examples of how the split in income levels and diversity between the northern and southern halves of the county affect residents of each neighborhood.

For instance, kids born in the Douglas Park Census tract, an area just off Columbia Pike with the largest share of non-white residents in the county as recorded in the 2010 Census, grew up to record an average household income of $36,000, regardless of their race or income level. That figure is the second lowest in the entire county.

In Nauck, a historically black community, children grew up to earn $34,000 a year, the lowest salary in the county.

The results are also striking in the High View Park Census tract, which encompasses the historically black Halls Hill neighborhood, which was literally walled off from its white neighbors for decades in the Jim Crow era.

Kids growing up in the area, of all income levels, went on to make about $44,000 a year, roughly the median for the county. Low-income children, however, recorded the third lowest salary among that group in Arlington, at $29,000 per year. High-income kids went on to make about $57,000 per year, much more towards the county’s median. The neighborhood has the second-highest share of incarcerated residents in the county, with 9.2 percent behind bars.

By contrast, children born in the county’s whitest areas tend to grow up to become considerably wealthier, regardless of their family’s income level.

In the county’s Census tract with the lowest share of non-white residents (an area including neighborhoods like Bellevue Forest, Dover Crystal and Woodmont), children grew up to make an average of $68,000, tied for the second highest salary in the county. Low-income kids recorded that same $68,000 average, as did high-income kids.

Similarly, the county’s second whitest Census tract — an area in Northwest Arlington containing neighborhoods like Country Club Hills and Arlingwood — kids grew up to make $80,000, the highest salary in the whole county. Low-income kids eventually made an average of $51,000 per year, while high-income children made it to $70,000 a year.

And, in the vast majority of the county’s whitest areas, incarceration rates were below 1 percent. 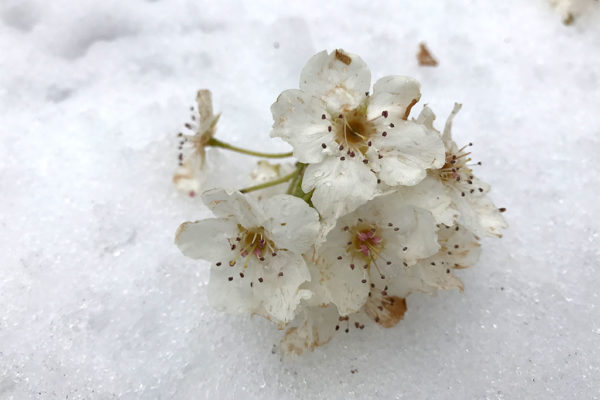 Arlington’s Irish Bars on St. Patrick’s Day — Today is St. Patrick’s Day and that of course means that Guinness will be flowing like water at Arlington’s half dozen Irish pubs. Among them: The Celtic House on Columbia Pike (recently lauded by Yelp and Travel + Leisure), Samuel Beckett’s in Shirlington, Ireland’s Four Courts in Courthouse, O’Sullivan’s in Clarendon, P. Brennan’s on Columbia Pike and Sine Irish Pub on Pentagon Row.

Arlington’s High-Earning Millennials — “Arlington has more millennials with a household income of $350,000 or more than any other jurisdiction in the country, with 8.7 percent of millennials among that wealthy cohort.” [Washington Post]

Donaldson Run Neighborhood Profiled — “Tracy and Jeremy Penfield bought their first house in Donaldson Run in Arlington County because they liked the location and the price. After living close to Metro for almost a decade, they welcomed the hilly, wooded neighborhood, which is largely car-oriented.” [Washington Post]

WeWork Creator’s Awards — WeWork, which has both co-working and co-living space at an office building in Crystal City, is giving out $20 million in grant awards to creators around the world, including here in the D.C. area. Applications to pitch an idea in D.C. are due this coming Monday. [WeWork]