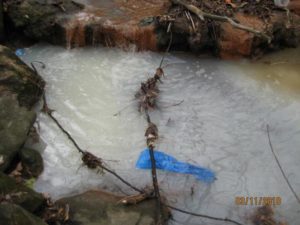 Arlington firefighters were called to the Gulf Branch Nature Center Wednesday afternoon after a strange, milky contaminant was spotted in the water.

Firefighters ultimately determined the substance was non-toxic. A subsequent Department of Environmental Services investigation revealed that the cloudy white water was caused by runoff from concrete work at a nearby home.

The incident is not altogether uncommon — DES investigates 50 to 100 complaints of stream contamination each year — but it serves as a reminder that many residents still don’t know where the county’s storm drains go.

Arlington’s 300 miles of storm sewers all empty into local waterways said Aileen Winquist, an environmental planner with the county.

Paint, antifreeze, petroleum products and portable toilet chemicals have all wound up in streams around Arlington due to people –purposely or inadvertently — dumping into storm drains.

“It impacts the invertebrate population in the stream,” said naturalist Jennifer Soles, who works at the Gulf Branch center. Invertebrates, the critters that live under rocks in streams, are especially sensitive to pollution.

Click here to see the county’s guide to identifying and reporting stream pollution. 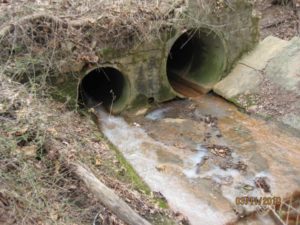 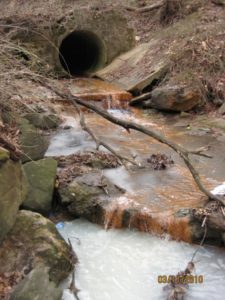