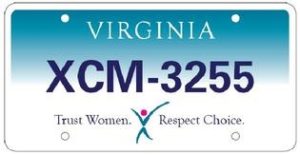 Arlington’s Del. Bob Brink (D) is hailing the passage of a bill that would create a pro-choice “Trust Women / Respect Choice” license plate option for Virginia drivers. The bill passed the Virginia House and the Senate over the weekend by votes of 64-30 and 22-15 respectively.

Brink, who introduced the original House version of the bill, called the vote “a victory both for reproductive rights and First Amendment principles.”

Brink says the bill will allow the state to “give equal treatment to the pro-choice position,” given last year’s creation of a “Choose Life” license plate.

The bill now heads to the desk of Gov. Bob McDonnell (R), who has said he doesn’t support Planned Parenthood, the organization that would receive revenue from the sale of the plates.