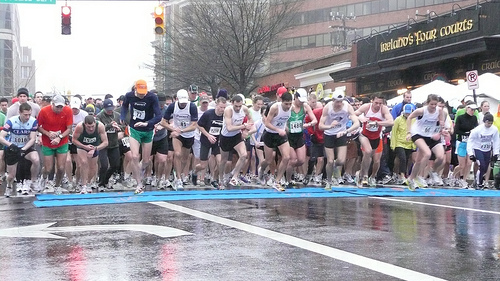 “How do you like this traditional Irish weather?” an organizer called out to the crowd just before the race began.

The race started at Ireland’s Four Courts in Courthouse and took runners along an out-and-back course down Wilson Blvd, through Rosslyn, and past the Memorial Bridge on Route 110.

The course made for a relaxed downhill first half with a tough uphill return including a steep quarter-mile hill just before the finish line.

“The climb from Rosslyn was incredibly arduous, but seeing the crowd at the final hill really inspired me to finish strong,” said race participant Elyssa Lacson.

The rain, which had been coming down in sheets before the race, relented to a light drizzle by the 9:00 a.m. start time. The initial deluge left participants soggy, but in good spirits.

“It was a really upbeat race, even with the rainy weather,” said Kathleen Flahive, who finished with a time of 37:25. “Despite having a ten year old pass me around mile two, I had a really great time and was happily surprised by my performance.”

Will Viviani, of Arlington, won the race with a finish time of 20:21. Lindsay Ritchings, of College Park, MD, was the fastest female runner with a time of 23:48.

Pacers Running Stores, which co-sponsored the event with Ireland’s Four Courts, hopes to make the race an annual event.