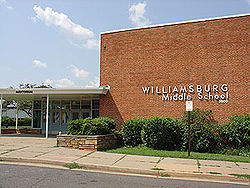 The details are still a bit sketchy, but Arlington police are investigating an indecent exposure incident that occurred this morning next to Williamsburg Middle School in north Arlington.

Sometime before 7:30 a.m., a man apparently jumped out of the bushes at 36rd Street and North Harrison Street as two female students walked by. We’re told he made “inappropriate gestures” and then ran off.

The incident was reported by a school resource officer. Police officers and a K-9 unit searched the area but couldn’t find the suspect. He’s described as white or Hispanic man with scruffy facial hair and a black cap.

Police do not believe this latest incident is related to the recent series of indecent exposure incidents on the W&OD trail.