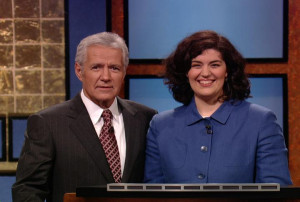 If you see Liz Murphy at a local trivia night, you might as well head for the exits. The Arlington resident has made five television appearances as a contestant on Jeopardy, and has $121,302 in winnings to show for it. Now, she has returned to Los Angeles for the taping of the 2010 Jeopardy Tournament of Champions, set to air in May.

Murphy, a foreign service officer and self-described “bookworm,” has spent the past several weeks studying topics like art, literature, geography and history during her lunch break and during her daily commute.

The 31-year-old Scranton, Pa. native is a repeat customer at the Arlington Public Library. At one point, in the time leading up to her appearances last year, Murphy recalls having 24 books out at one time.

According to her hometown newspaper, Murphy used the prize money from her first appearances for trips to Europe and for a new laptop, which she’s using to write a detective novel.

Murphy will face 14 returning winners during the Tournament of Champions. The top prize is $250,000 cash.