There were four homicides in 2009, compared to two in 2008. There has been one homicide (for which an arrest has been made) so far this year. 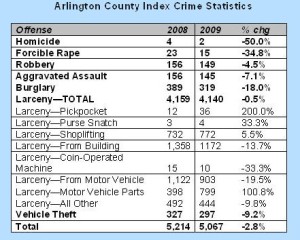 There were also 297 vehicles reported stolen in 2009. Vehicle theft in Arlington County has not been that low since the early 1960’s.

“This is very good news for our community,” said Arlington County board chairman Jay Fisette. “In these tough economic times, to see a drop in the overall crime rate, and a significant drop in the violent crime rate, is more evidence that Arlington is a safe place to live — and getting safer.”

“Our officers have accomplished a great deal in the past year combating crime in Arlington and receive notable support from the community,” police chief M. Douglas Scott said. “We continue to enjoy a close working relationship with the community to increase awareness and the practice of good crime prevention strategies.”