The following is excerpted from the blog Every Food Fits. 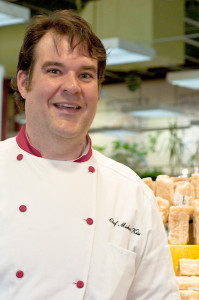 A traditionally-trained chef, Michael Kiss dared to leave his traditional kitchen gig and, through his “friend named serendipity,” found his calling.

Five years ago he was living in Georgia, working as a chef and teaching cooking classes at a cookware shop, a job that he loved. Then, when his wife’s career moved them to Washington, D.C., Kiss took it as an opportunity to change his career.

Having worked with domestic artisan cheeses as they were gaining popularity at the turn of this century, he took his positive attitude to the cheese counter at the Silver Spring, Md., Whole Foods Market. “I went from executive chef in a restaurant to a $7-an-hour job in the cheese department.”

Kiss moved up the ranks within Whole Foods, moved to the Arlington store, and eventually, the “Store Chef” position was created for him. “When you have a passion,” Kiss said, “you find a way to do it.”

Nearly every Tuesday at 7 p.m. at 2700 Wilson Blvd., Kiss teaches basic cooking classes on the store’s second floor. Classes like “29 ½ Minute Meals,” “Cook Like a Chef” and others to help new cooks get comfortable with meal preparation while providing tips for the seasoned home cook.

“I used to write more complicated classes, but those were more intimidating,” Kiss said. “I teach the simple ABCs of cooking for people who need inspiration.”

Read the part one or part two of the interview in its entirety.