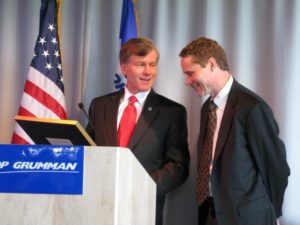 It’s official: a Fortune 100 company is moving its headquarters to Northern Virginia.

Bush said the company is in “final negotiations” with building owners in Arlington and Falls Church — both within Rep. Jim Moran’s eighth congressional district — and will announce a location within a month. The new headquarters will open by the summer of 2011.

“I’ve got to say, this is  certainly one of the most exciting days — and the best announcement — we’ve been able to make in a long time,” McDonnell said.

Bush said the decision to locate in Virginia largely came down to real estate and economics. The state offered an incentive package worth between $12 and $15 million to lure the company, which already employs 30,000 people in Virginia. Bush also cited the region’s proximity to its largest customer, the Pentagon.

In the end it was a “very close competition,” Bush said, adding that the mid-Atlantic “is a great region to do business.”

“This is a very exciting step for our company and we’re looking forward to being part of this community,” he said.

The headquarters will bring about 300 jobs with an average salary of $200,000 to the area, along with a number of support and contract jobs. Bush said the company is considering the possibility of relocating jobs from the Rosslyn office to the new headquarters. 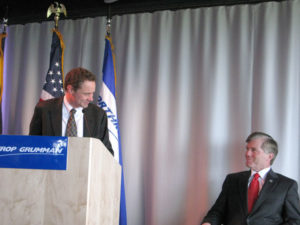 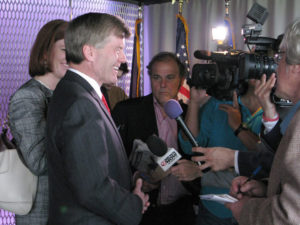