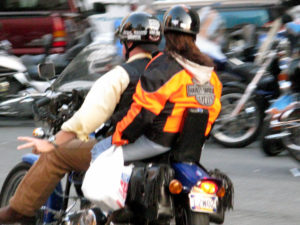 It’s hard to criticize a group that travels long distances to gather in support of our troops. It’s even harder when that same patriotic group is helping the local economy by staying at local hotels and dining at the local Chili’s.

But ask just about any Arlington resident who lives within earshot of Route 1, I-395 or I-66 what they think of Rolling Thunder, and they’ll probably have some uncharitable things to say about the “Thunder” part of the Memorial Day weekend tradition.

In fact, the gadfly blogger over at Arlington Yupette may have hit a nerve with this post about how the noise seems to be getting worse every year.

“These guys kept my family awake the past 3 nights,” wrote one commenter.

“It’s a yearly contest to see who can ride the loudest motorcycle with the most obese woman on the back,” said another member of the complaint chorus.

Not everyone seems to agree with the criticism, however. Sun Gazette editor Scott McCaffrey, who previously welcomed the Rolling Thunder crowd to town on his editor’s blog, mused that “it must be the complainer’s equivalent of a slow news week.”