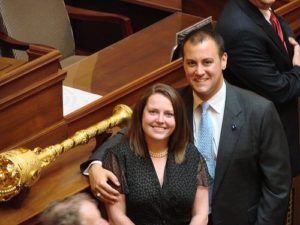 Today she apparently answered her own question.

Del. Englin, a Democrat who represents parts of Arlington and Alexandra in the Virginia General Assembly, later tweeted: “on the train to NY w/my hot wife to celebrate our 14th anniversary.”

That sounds much more exciting than examining the nuances of Arlington’s change-of-government petition. Here’s wishing the hot couple a happy anniversary.