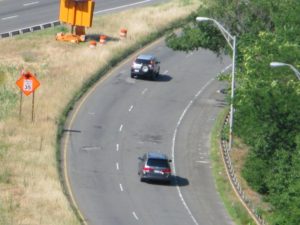 Virginia Republicans got a major boost last month from those vying to build toll lanes on Interstates 95 and 395.

The Texas-based engineering firm Fluor and Australian toll road developer Transurban collectively donated $20,000 to Virginia’s GOP in May, according to the Virginia Public Access Project. Neither company donated to Democrats in the most recent reporting period, according to VPAP records.

The money comes as Governor Robert McDonnell and state transportation officials are pushing to resurrect a plan to replace HOV lanes with High Occupancy Toll lanes on both highways. The lanes on I-95 would then be extended from Dumfries to Spotsylvania County to make a 56-mile toll road, which would compliment HOT lanes now being built on the Capital Beltway, between Springfield and Dulles Toll Road, by the same two companies.

Virginia Transportation Secretary Sean T. Connaughton did not immediately return a request for comment on Monday.

Fluor was also a major contributor to Virginia Gov. Robert F. McDonnell’s 2009 campaign. The company’s $25,000 in donations made Fluor one of McDonnell’s largest contributors, according to VPAP records.

VPAP also shows Fluor donated $15,000 to McDonnell’s inaugural committee in January, making for a total of $307, 235 in donations to Virginia Republicans since the introduction of the I-95/395 HOT lanes project in 2002. During the same period, Fluor donated $146,200 to state Democrats.

The I-95/395 HOT lanes project stalled last August when the companies said they didn’t have enough private investors to back the project and after Arlington County filed a lawsuit against the state and federal government over the project. It claimed the necessary environmental impact studies that needed to be completed before the lanes could be built were never done. Officials also said the lanes would have an adverse affect on Arlington residents who live along the I-395 corridor.

The suit could now end up in federal court.

If the I-95/395 HOT lanes are finally approved, it’s not clear how much drivers would have to pay to use the lanes or how long the two companies would lease the lanes from the state.

When the Beltway HOT lanes open in late 2012, Fluor-Transubran will lease the lanes for 75 years.