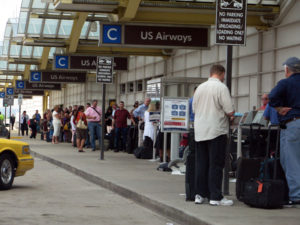 Update at 2:10 p.m. — Airport officials say power has been restored and ticketing lines are beginning to move. They still advising travelers to check with their airline and print boarding passes at home, if possible, due to residual delays from the outage.

Officials at Reagan National Airport are “anticipating major delays and cancellations” as a result of a power outage affecting Terminals B and C.

Mickalonis said passengers flying out of Regan National today should check with their airlines first, then, if possible, go online to print out their boarding passes.

The power outage hit at 11:45 this morning, typically a slower time for the airport. But as evening approaches, and more and more flights are affected by the outage, major delays are likely.

At 1:00 this afternoon, there were already long lines forming at the curbside check-in stations.

The source of the power outage appears to be a fire at a power substation just north of the terminal. The substation is located at the headquarters building for the Metropolitan Washington Airports Authority, which is also without power.