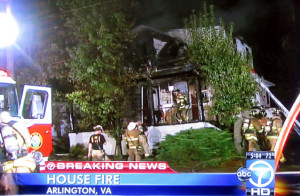 Update at 12:20 p.m. — An arson dog found some sort of combustible substance in the house, TBD reports, but officials caution that it could take awhile for a state laboratory to examine the substance and draw any conclusions.

A fast-moving fire engulfed a home on the 2100 block of North Edison Street, near the Langston-Brown Community Center, early this morning. Initial reports suggest the home was abandoned, utilities were turned off, and nobody was inside at the time.

The blaze started on the porch around 3:30 a.m. and spread to the second floor. It took firefighters nearly an hour to extinguish the flames.

While the fire burned, residents as far away as Ballston reported smelling smoke.