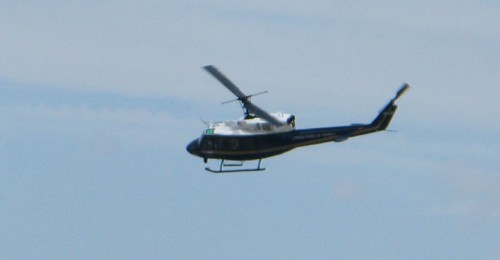 Hynes, who chairs the Aviation Policy Committee for the Metropolitan Washington Council of Governments, says there has been a noticeable uptick in complaints about helicopter noise in the past couple of years. She says Wednesday’s forum will allow residents to learn more about the rules that govern helicopter flights in the national capital region.

Hynes says she hopes the forum will also lead to the development of a better system for handling citizen complaint about helicopters, especially military helicopters, which are the most prevalent over Arlington.

“The focus is to have a good conversation about the impacts of the helicopter traffic on the residents, and see if there’s some way we can work with the military to lessen that impact,” she said.

Military helicopters usually fly defined routes from the Pentagon to other military installations. The flight paths are typically major highways like I-395 or waterways like the Potomac River. Even if the helicopters pilots stick to the path, however, they sometimes fly lower than they’re supposed to, irking residents.

Homeland Security and local law enforcement flights are also fairly common around Arlington, Hynes noted. News helicopters typically don’t fly over Arlington because the county is within a no-fly zone around Reagan National Airport, put into place after 9/11.

Panel participants will include military representatives, a Federal Aviation Administration regional administrator and a member of the Fairfax County board of supervisors. Fairfax County, Hynes says, has recently seen a significant increase in helicopter-related complaints.

Most of the two hour forum will be devoted to panel discussions. A resident question and answer session may be held at the end.

Hynes said a major priority will be to facilitate the creation of a unified, well-publicized phone number that residents can call to complain ab0ut helicopter noise. She expects that such a number would likely be run by the military.

The forum is being held from 7:00 to 9:00 Wednesday night. A video from the event is expected to be posted on the internet a few days after the forum.