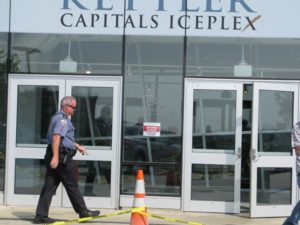 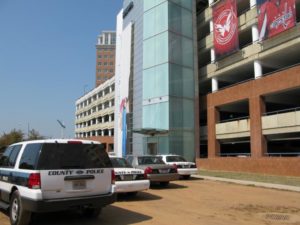 Police are investigating a death that occurred at Kettler Capitals Iceplex in Ballston just before noon today.

A man in his 20s or 30s suffered some sort of a medical emergency in the complex. Paramedics performed CPR on the man, believed to be a youth hockey coach, and took him to the hospital, where he was pronounced dead.

The incident happened while the Washington Capitals were practicing in an adjacent rink. Police have confirmed that they’re investigating a death, but have not released any other details.

Detectives were on scene taking statements from witnesses earlier this afternoon.

Update at 5:30 p.m. — As first reported by DCist, the man who died has been identified as Kettler Capitals Iceplex hockey director Brian St. Louis.

St. Louis has also been serving as a youth hockey coach for the Washington Little Capitals.

The following has been posted on the Little Capitals web site:

The Little Caps organization and the Kettler Capitals Iceplex extend their deepest sympathies to Brian’s wife, Emily, and his surrounding family and friends.

Brian’s passion for the sport of hockey and the people involved will long be remembered in this area.

Funeral arrangements and other information will be passed along when finalized.