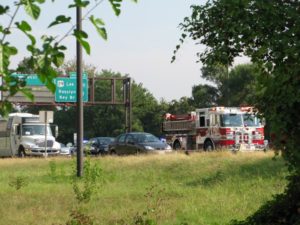 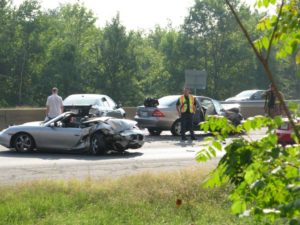 (Updated at 9:45 a.m.) A four-car accident with injuries has occurred on eastbound I-66 near the Roosevelt Bridge and the ramp to Route 110.

Initial reports suggested one vehicle flipped over — if so it has since been righted. We’re also hearing that CPR was performed on one victim, and that he was rushed to the hospital in full cardiac arrest. (See update here)

The vehicles involved in the accident include a Porsche, a Mercedes-Benz, an Acura and a minivan. Three other cars with no immediately visible signs of damage are also stopped at the accident scene.

Only one travel lane currently gets by at the accident scene.

Traffic on eastbound I-66 is being diverted onto Spout Run. Delays start at Sycamore Street/East Falls Church Metro.

Update at 11:05 a.m. — Still just one lane getting by as flatbed trucks continue to take the damaged cars away. 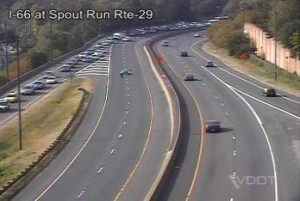 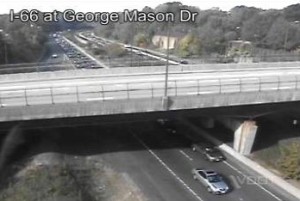