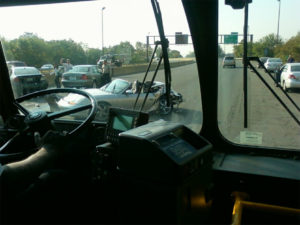 Police have released additional details about this morning’s now-fatal multi-vehicle accident on I-66.

Chip Moss, 52, of Herndon was driving eastbound on I-66 near the exit to Route 110 around 9:00 this morning when he suffered an apparent heart attack, lost control of his car and crossed through several lanes of traffic. Two people suffered non-life threatening injuries in the resulting seven car pile-up, Arlington police said in a statement.

Moss was rushed to a local hospital while paramedics performed CPR. He was later pronounced dead.