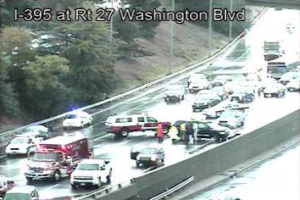 An SUV rolled over several times on southbound I-395 near the ramp to Washington Boulevard. All lanes are currently blocked.

At least two other cars are reported to be involved in the accident.

There are no immediate reports of injuries.

Update at 9:30 a.m. — Two lanes are now getting by the accident scene. The SUV is currently being loaded onto a flatbed tow truck. Traffic backing up to the Pentagon.

Update at 10:10 a.m. — WTOP’s Adam Tuss is confirming scanner reports that a mom and her two kids were in the SUV at the time of the accident. They were taken to Fairfax Hospital.