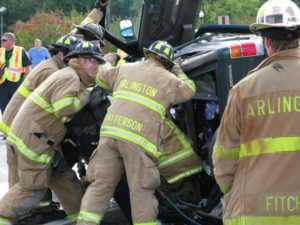 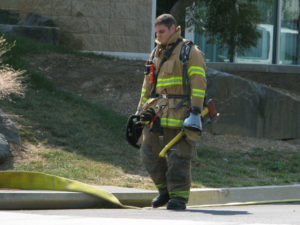 This weekend, the nation’s fire service will honor those firefighters  who died in the line of duty during 2009.  The names of 80 fire fighters  who lost their lives in service to their communities will be added to  the National Fallen Firefighters Memorial in an annual ceremony at  Emmitsburg, Maryland. The names of 25 firefighters who died in previous  years will also be added. The plaques surrounding the Memorial, which  was established in 1981, contain the names of more than 3,400  fire fighters. Firefighters and fire department honor guards from across  the country will gather to pay tribute to the lives of their fallen  comrades.

Unfortunately, firefighting remains a dangerous profession.  Despite a  reduction in the number of fires nationally, effective fire and rescue  operations require firefighters to be in harm’s way.  Firefighters are frequently exposed to high temperatures and toxic products of combustion and they work around heavy, fast moving objects, all while wearing protective gear and equipment that weighs in excess of 60 pounds.  Rates of cancer and heart disease are higher among firefighters.

Firefighters  accept a measure of risk when they take the job, understanding that the  ultimate sacrifice may be required to save the life of another under  extreme circumstances. They do not accept this risk cavalierly. As a  whole, the fire service continues to work tirelessly toward improvements  that will reduce the number of firefighter injuries and fatalities.

Arlington County Fire Department has been fortunate; we have not  suffered a line of duty death since 1982 when Firefighter Mike Miller  lost his life.  Before the loss of Firefighter Miller, the department  lost two captains in separate incidents.  On October 19, 1964 Captain  Archie Hughes was lost after becoming trapped in the flashover of an  attic fire. Captain Charles Theodore died of smoke inhalation while  fighting a fire on June 24, 1961.  In a ceremony earlier this year, the  department retired their badges.