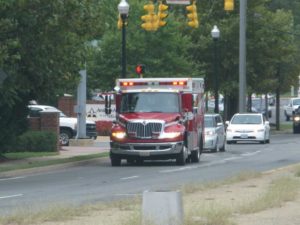 Nearly every day, the number of Arlington County ambulances ready to respond to calls reaches zero, prompting dispatchers to broadcast a warning to supervisors while they scramble to find medics that can be put back into service.

While there are often other options available in the event a call comes in while all ,paramedic units are busy, Arlington Fire Chief James Schwartz says it’s a problem the department is aware of and trying to address.

“EMS is one of my highest priorities,” Schwartz said. “Almost every day we run out of available medic units.”

Medical calls make up about 60 percent of the fire department’s call volume, according to Schwartz. At any given time, about seven paramedic units are on duty in the county. Of those, two or three are usually out at a hospital, delivering patients or restocking their supplies.

When the number of paramedic units reaches the ‘critical’ level — one or none — the first order of business is usually to see if any units out at the hospital can be put into service. Another option is to take advantage of the county’s mutual aid agreement with the Alexandria, Fairfax County and Reagan National Airport fire departments.

In the event that a paramedic crew is temporarily unavailable, a fire engine can be sent ahead. Since the county’s fire trucks are often staffed with trained paramedics and equipped with advanced life support gear, sending the engine first means there is no delay in a patient’s on-scene medical treatment. But an ambulance is still needed to take the patient to the hospital.

In a real pinch, a “surge unit” in the Clarendon/Courthouse area can be put into action by moving a fire crew to an unstaffed ambulance.

Schwartz said he’s unaware of any instances in which medics were delayed and a patient was harmed as a result.

The paramedic situation was discussed during this year’s budget, Schwartz said, adding that county policymakers are aware of the problem and often ask about it. He suggested that the department will seek funding for another medic unit during the next round of budget talks.

“I would expect that it would be a topic of this year’s process,” he said.