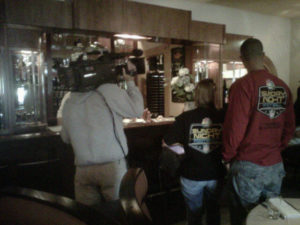 What better imagery to air during a Washington Redskins game than a restaurant that’s in the midst of a “Bacon Week.”

Clarendon’s Restaurant 3 reported on its Twitter feed today that an NBC Sports camera crew was filming b-roll around the restaurant this afternoon. The footage is expected to air during Sunday night’s game between the ‘Skins and the Indianapolis Colts.

The game will include a tribute to the late “Grandpa Hogette” Ralph Campbell, one of the co-founders of the Washington Redskins Hogettes, who was buried at Arlington National Cemetery last week.

Restaurant manager Leslie Foster says they made all nine items on the Bacon Week menu for the crew, who filmed the process from creation to consumption. Foster said the large lunchtime crowd played along with the filming.

“It was crazy today,” she said. “Everybody was really excited they were here.”

In other Bacon Week news, Foster says the restaurant is booked solid through Wednesday. However, Bacon Week has now been extended to Saturday, Oct. 23. It was originally supposed to end on Thursday, Oct. 21.