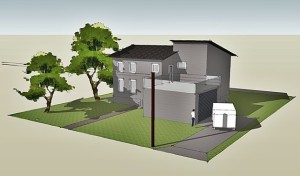 The Barcroft neighborhood is going to be the home of the Washington area’s second passive house.

Passive house is an ultra energy efficient building style that’s becoming increasingly popular in Europe. There are only about 20 passive houses in the United States.

The eco-friendly house will be built on the site of yesterday’s spectacular made-for-TV controlled burn exercise. The small, condemned and now-charred home currently on the site will be torn down. Construction is expected to begin around December 1 and wrap up in the spring.

The project is being done on spec by the Burke-based developer Kinsey Properties.

Roger Lin, a managing partner at the firm, says the house will raise the bar for efficiency in environmentally-conscious Arlington.

“It’s highest standard in terms of performance-based green buildings,” he said. “They’re popping up all over the country now.”

Lin said the only other passive house in the DC area is in Bethesda.