Dominion spokesperson Le-Ha Anderson clears up come of the confusion surrounding yesterday’s power outages in Ballston and the fire response at the National Science Foundation building:

We had a couple of different outages in the Ballston area yesterday.

Eight customers between North Fairfax Drive and N. Quincy Street were without power from 1:45 – 6:18 PM. The cause of the outage is unknown, but we were able made some repairs to the equipment and re-energized the transformer to restore all customers.

The National Science Foundation building is where the other outage occurred. Dominion received a call that there was a fire in the vault where the transformer is located. The sprinkler system was activated and the vault filled up with water. After draining the vault of water, we investigated the outage and found that the transformer was damaged. We will be replacing that transformer this morning. The National Science Foundation has damage within its own system, so they will also need to make repairs. This outage is affecting the HVAC system within the building, but the lights are on. It is my understanding that the NSF made the decision yesterday to close today so that all repairs could be made.

The power outages forced the Arlington Public Library and The Front Page restaurant, among others, to close early.

Update at 9:30 a.m. — North Stuart Street between Wilson Blvd and 9th Street is being shut down for emergency electrical work. The closure may affect some bus routes.

Update at 2:10 p.m. — Below are photos of power crews working on the lines on Washington Boulevard, near the Arlington Central Library, and of crews replacing a transformer below the NSF building. 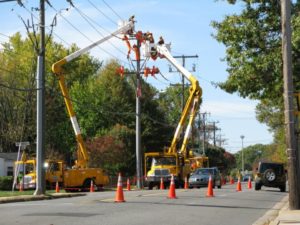 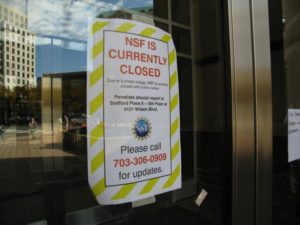 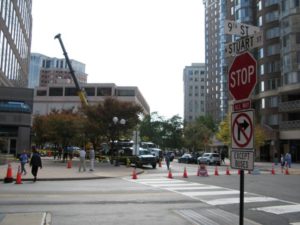 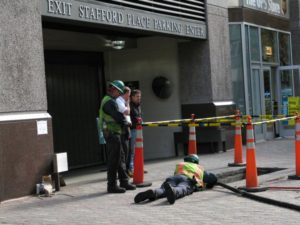 Read more →
More Stories
Reminder: Vote For Us in the 2010 ABBIESEmergency Loudspeakers to Be Tested in Rosslyn