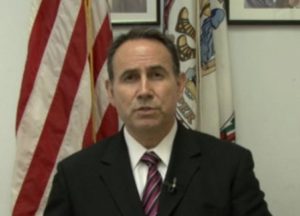 But earlier this week Murray found the time for a 12-minute interview with New Tang Dynasty Television, which is affiliated with Falun Gong, the Chinese religious movement.

During the interview, Murray blasted Moran’s outspoken support of earmarks, calling the ten-term congressman “irresponsible” and “an anachronism from the past.”

“The earmarks benefit [Moran] more than anyone else,” Murray said. “The way he works earmarks, it’s called ‘pay to play.’ The defense industries and the IT industries, they feel forced to participate in it. They give him campaign donations in return.”

In response to an inquiry from ARLnow.com, the Moran campaign broke its usual silence and fired back. 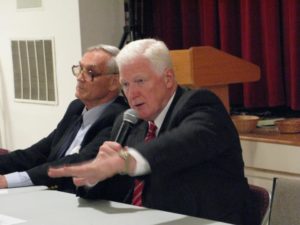 “Patrick Murray has no clue about the needs of the 8th District because he only moved here 18 months ago,” the campaign said. “If he had more knowledge of Northern Virginia, he’d be aware of the importance of earmarks for building Dulles Rail, the Woodrow Wilson Bridge, Springfield Mixing Bowl and countless other projects that create jobs and benefit our region’s quality of life.”

“Mr. Murray’s attacks on the Federal Government, such as calling for the elimination of the Department of Education, are way out of touch and will fall on deaf ears,” the campaign added. “Northern Virginians know how integral the Federal Government is to our economy, which includes thousands of contracting jobs, consulting positions and related service industry jobs.”

In other parts of the surprisingly topical NTD TV interview — it may have been the most issue-oriented interview of the entire campaign — Murray tried to strike a more moderate tone.

He called for a “pragmatic approach” to immigration and health care, although he said he would vote to repeal President Obama’s health care reform bill. Murray, who pledged to help balance the budget, also criticized the amount of money being spent on the economic stimulus.

“That’s not how you create jobs, by spending government money and taxing people more,” Murray said.

Update at 2:10 p.m. — While Murray did not attend the debate, he did pick pick up a high-profile endorsement last night. Rising GOP star Sen. Scott Brown, who won Sen. Ted Kennedy’s old seat in a headline-making political upset, said he supports Murray’s campaign. “It’s an honor to endorse an Iraq War veteran,” Brown said in a statement.