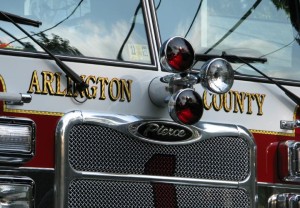 It was a horrific scene on South James Street in Falls Church Saturday afternoon.

On a quiet residential street, two blocks away from the Broadale Village Shopping Center, a 54-year-old woman apparently doused herself with a flammable substance and lit herself on fire, according to Arlington fire department spokesperson Lt. Ed Hughes.

Falls Church police and Arlington firefighters and paramedics responded to the scene.

“Upon arrival, officers found a female, in her 50s, leaning against the outside wall of a residence, underneath a spigot with water running over her body,” Falls Church Police said in a statement today. “She had second and third degree burns over 70% of her body.”

The woman, whose identity has not been released, was rushed to nearby Thomas Jefferson Elementary School, where a helicopter was waiting to airlift her to the Washington Hospital Center burn unit. She succumbed to her injuries early Sunday morning, Falls Church Police said.

The Falls Church Police Department and the Arlington County Fire Marshal are investigating the incident as a possible suicide, according to Arlington Chief Fire Marshal Benjamin Barksdale.