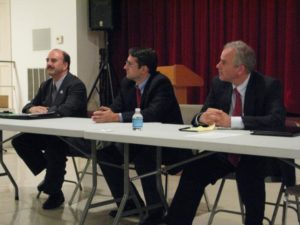 If Jon Stewart wanted to find sanity in politics, he would have had to look no further than across the river in Arlington. This year’s county board race has been polite, issues-oriented and has avoided the stench of national political hyperbole or special interest interference.

Adding to the sanity, the race has also featured a viable third-party candidate who’s a full participant in debates, not a side show.

The most heated portion of the debate — relatively speaking — came when Kelly again tweaked Zimmerman on the county’s Columbia Pike/Crystal City streetcar project. Referring to it as a “$200 million trolley,” Kelly made an economic argument against the massive project.

“I just don’t think it’s a wise investment moving forward,” was Kelly’s zinger. Chisholm — a self-described social liberal and fiscal conservative — agreed, and spoke of the “gentrification effect” the streetcar could cause on Columbia Pike.

Zimmerman, who has made the streetcar a bit of a personal mission, responded with a passionate defense of the “years of input” on the project and the “stronger network of public transportation” that the project will bring to the Pike. He announced his annoyance that debate rules didn’t give him enough time to discuss the project’s financing.

The remainder of the debate was pure zen for a sanity supporter. In fact, the most intemperate remaining portion of the debate came from the moderator, who asked about the “glib” county staff response to concerns about the development plan for East Falls Church. 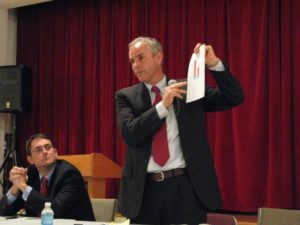 Kelly talked about the “disturbing” lack of public input into the Crystal City Sector Plan and said the board should take more time on East Falls Church. “You don’t just do density for density’s sake,” he said.

Zimmerman said the board will, in fact, take more time on the plan and will “approve something that I’m confident will reflect the needs and desires of the people who live in East Falls Church.”

Kelly said preserving affordable housing on the Pike starts with not spending money on projects that could result in the loss of garden apartments and existing market-rate affordable units.

Chisholm worried about Pike residents moving to Fairfax and questioned the $250,000 salary of the head of a county-supported housing non-profit, who he did not name. Chisholm added that the relationship between developers and the county government is “too cozy.” 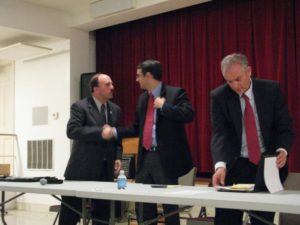 On the bond issues on Tuesday’s ballot, Kelly and Chisholm criticized the proposed use of bond funds for both capital projects and infrastructure maintenance.

“If we can’t maintain what we already have, why are we putting funds in there to buy something new,” Kelly asked.

Zimmerman countered that the county’s AAA bond rating proves that the board has practiced sound fiscal discipline.

On the state of the Metro system, Chisholm compared Metro to a car that “needs a lot of work” due to years of neglect.

Zimmerman, on the defense due to his position on the Metro board, said that Metro’s problems stem from insufficient funding. The system is getting older, he said, necessitating more investment.

Kelly, staring down a particularly juicy target, said he didn’t want “to politicize Metro’s problems,” but argued that the cause of Metro’s safety problems aren’t financial.

“Safety is not a matter of money, it’s a matter of culture,” Kelly said. He then criticized what he said was Zimmerman’s intervention to save a $100,000 per year arts manager position at Metro.

Kelly, whose campaign signs lack the word “Republican,” politely asked voters in heavily-Democratic Arlington not so much for votes, but for an open mind.