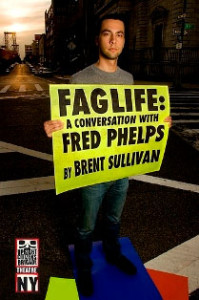 How do you deal with a homophobe like Fred Phelps, founder of the Westboro Baptist Church. How do you cope with the raw hatred of someone whose minions hold signs that say “God Hates Fags” and “Thank God for Dead Soldiers”?

For one 25-year-old New Yorker, the solution is comedy.

Brent Sullivan will be bringing his unique one-man comedy show, Brent Sullivan’s Fag Life: A Conversation with Fred Phelps, to Artisphere this weekend.

The show is described as an “innovative approach to revealing bigotry and hatred in America by having a discussion with a fanatic.”

“The show is a celebration of gay culture, while very critical of certain aspects of the LGBT community that are outdated, stereotypical and offensive,” a press release says. Sullivan’s comedy is “a straight friendly approach to being gay… without the stereotypical attitude that plagues most gay comedians.”

Though Sullivan is alone on stage, he’s joined in spirit by Phelps, whose whose zany sound bites are played intermittently for comedic effect and as a way to introduce new topics of conversation for Sullivan. (See a video clip here)

END_OF_DOCUMENT_TOKEN_TO_BE_REPLACED

More Stories
Foreign Visitors Flock to Arlington for ElectionsA BRAC Move, One of Many, Moves Forward