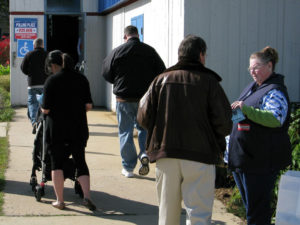 Visitors from about a dozen countries came to Arlington on Tuesday to witness democracy in action.

As it does nearly every election day, Arlington played host to foreign media outlets and to foreign officials interested in learning more about the American election process.

Television news crews from France, Japan, the Netherlands, Sweden, China, Australia and the UK all brought cameras to Arlington polling places throughout the course of the day.

The State Department and several NGOs also hosted visitors in Arlington. Observers from Spain, Bulgaria, Iraq, Pakistan and elsewhere came to learn about “how we run democracy in the U.S.”

Despite a large number of requests this year, county Registrar Linda Lindberg says there were even more requests from foreign visitors during the 2008 presidential election.

She said that Arlington’s proximity to D.C. is what makes it an attractive location. The county is not chosen for any specific reason — it’s simply used as an example of what takes place in the country as a whole.

She noted that the county tries to plan foreign visits to polling places in a way that ensures voters aren’t disturbed.

“They have to keep them in small groups so they don’t disrupt the election.”