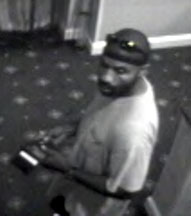 Arlington police have released surveillance images of a man suspected in a robbery, abduction and sexual assault in South Arlington.

Police say the man forced his way into a hotel room and restrained two women: a mother and daughter who were visiting from Canada. He sexually assaulted the daughter, who was in her 50s, and then stole electronics and cash as he left.

“The suspect is described as an African American male approximately 40 years old, 5’8″ and 180 lbs,” police said in a statement. “He appeared unshaven and was wearing a grey t-shirt with a design on it, tan cargo shorts, white shoes and a black baseball cap.”

The release of the images comes almost three months after the crime, which occurred on Aug. 14 at the Best Western hotel on South Glebe Road.

It took a while for detectives to track down the victims in Canada and make a positive identification on the suspect, police spokesperson Det. Crystal Nosal told ARLnow.com.