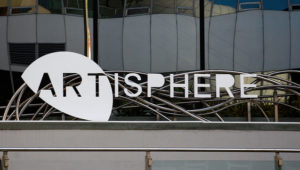 The event, being held on Saturday, Dec. 4 from 11:00 a.m. to 1:00 p.m., will feature arts and cultural performances, culminating in “a large public display of affection by people from all walks of life.”

“We expect 300-500 people to attend, including many straight allies,” the event’s Facebook invitation reads. “A YouTube video will be produced from live footage recorded at the event… Our video will be premiered at the Artisphere Dome Theatre on December 20th along with an opening reception and will then be posted on YouTube.”

Cookies and hot chocolate will be served between video shoots.

The event is sponsored by the Arlington Gay and Lesbian Alliance.