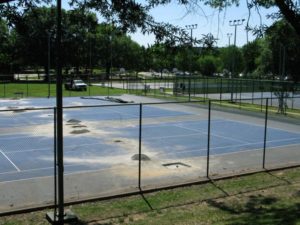 Arlington County’s tennis program has been recognized for excellence by the United States Tennis Association.

The USTA Mid-Atlantic Section named Arlington County’s Parks Department its “2010 Parks and Recreation Agency of the Year.” The award is in recognition of the county’s “overall tennis programming.”

There are nearly 90 tennis courts in Arlington County, including those currently under construction. This year the county renovated 14 tennis courts (see photo).

Parks spokesperson Nathan Spillman says there’s “no doubt that it’s been a good year for tennis in Arlington County.”

Spillman said that there were 1,135 youth and adult registrations for county-run tennis classes this year — a 144 percent increase since 2007.

Other factors contributing to Arlington’s recognition, Spillman said, were the 10,700 hours of tennis playing time reserved so far this year, along with the two USTA-sanctioned tournaments held in the county and the two charity tournaments hosted in partnership with the Arlington County Tennis Association.