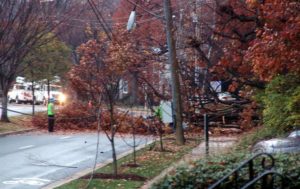 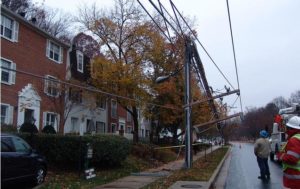 The falling lines caused power to briefly go out over a wide swath of the county. Power in much of south Arlington and parts of north Arlington flickered on and off for a minute before, in most areas, eventually coming back on.

As of 12:30 a.m., the power was still out in the Fairlington area. At the time, Dominion was reporting that 1,729 customers were without power.

Witnesses say they saw a very bright flash in the sky just before the lights went dark.

Just saw a bright flash of light in South Arlington (we are just north of Arlington Blvd, and saw the light in the sky, resembling lightning, about 10 minutes ago). Our lights flickered on and off, and now we hear fire trucks in that direction… Ironic on a night when Dominion was holding a meeting about adding a new transmission line.

The flash could be seen as far away as Westover.

From a friend’s backyard, directly behind the old Reed school at 19th and Madison, saw an enormous blue green flash in the sky–once, then again. We also heard a low roaring sound, like a very transformer blowing. The flash lit up the entire sky in a color I’ve never seen before, a blue/green like copper sulfate in a flame. My friend, a physicist and amateur astronomer, said he had never seen the like either.

Walter Reed Drive is expected to remain shut down between South Wakefield Street and South Dinwiddie Street “throughout the day” while crews clean up the mess and replace several utility poles. It will likely be closed for the evening rush, we’re told.

As of 12:10 p.m, Dominion reports that 374 customers are still without power in south Arlington.