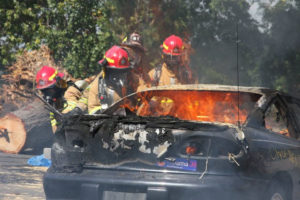 The Arlington County Fire Department is in “heavy recruitment mode,” trying to stay ahead of a forthcoming wave of retirements.

On Friday, about 15 recruits are expected to graduate from Arlington’s fire academy and enter service as probationary firefighters. Next year, the department expects another 40 recruits to make their way through the academy.

The new recruits will help to make up for retirements and a wave of attrition that occurred during better economic times, when a number of Arlington firefighters were lured to departments in the outer suburbs.

The timing of some of the retirements is being driven by changes to Arlington County’s retirement benefits, according to Fire Chief Jim Schwartz. Older firefighters who might otherwise have stuck around for a bit longer are planning to retire by January 2012, in order to take advantage of better retirement health coverage. To help control costs and comply with a federal funding requirement, the county government is lowering a cap on family retirement health benefits after that time.

The fire department is especially vulnerable to retirements because there are currently a high percentage of older firefighters in the department. Plus, public safety personnel are eligible to retire at a younger age: 55.

“It’s an aging organization,” said Arlington County Human Resources Director Marcy Foster. “There will be a lot of retirements across the board.”

Among those planning to retire are a significant portion of the department’s senior leadership. About five battalion chiefs and a number of captains will be retiring, according to Schwartz.

Another concern that has cropped up over the past few weeks is overtime.

In addition to the fire recruits, about 10 firefighters are currently training as paramedics. The need to detail operations personnel to the fire-EMS academy has put the department in an “overtime jam,” Schwartz acknowledged, confirming reports we had heard from the rank and file. That, however, should clear up soon, we’re told.