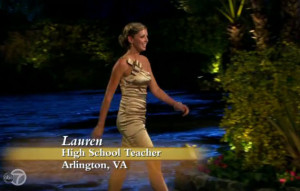 The Bachelor is back for yet another season, and this time around one of the contestants lives in Arlington.

Well, at least that’s what the on-screen graphic said during last night’s premiere. We didn’t really get to know Lauren, the 26-year-old high school teacher, because we really didn’t hear much from her. The most screen time she got was at the end, when she failed to get a rose from bachelor Brad Womack.

“This was a leap of faith that I made that didn’t work out for me, and that pisses me off,” Lauren told the camera. “He missed out on a really great woman who’s going to be an amazing wife, an amazing mother, who has — I think — a fantastic personality. So it’s his loss, obviously.”

Lauren’s official ABC biography reveals what bachelor Brad is missing out on. Lauren says she likes Lil Wayne, Taylor Swift and the Dave Matthews Band. She has no tattoos and her favorite holiday is Halloween. She owns a toy poodle named Gabby, and she’s a big fan of the history of Henry VIII and the Elizabethan era.