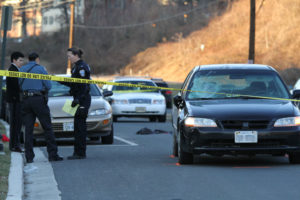 (Updated at 5:30 p.m.) A 15-year-old boy suffered critical injuries when he was struck by a car on the 4500 block of South Four Mile Run Drive, police said Wednesday evening.

The accident occurred around 3:30 p.m. The driver of the striking vehicle stayed on the scene, according to police spokesperson Det. Crystal Nosal.

Nosal said police are continuing to investigate the accident. As of 5:30 p.m., the westbound lanes of Four Mile Run Drive had reopened, but the eastbound lanes were still closed.

Based on initial reports from the scene, the victim was said to have been bleeding profusely from the head after he was struck by the black Honda heading eastbound on Four Mile Run Drive. The car’s front windshield appeared to have suffered heavy damage as a result of the collision. A parked car also suffered damage to its rear driver’s side window, apparently as a result of the accident.

A shoe lay across the street from where the victim was struck. A black backpack also could be seen near the point of impact.

Police were seen interviewing a group of school-aged children shortly after the accident occurred.

I wanted to inform you about an incident that happened this afternoon. While walking home from school, a Wakefield student was seriously injured when he was hit by a car near the 4500 block of Four Mile Run Drive.

The Arlington Police Department is investigating the cause of the accident.