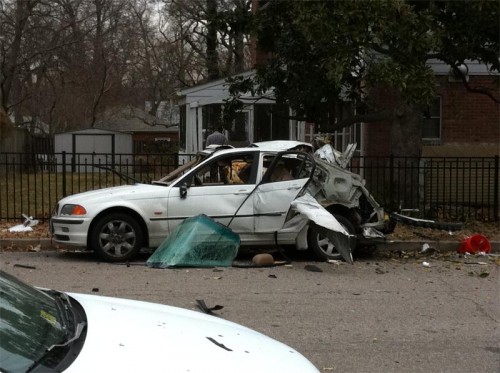 (Updated at 11:20 a.m.) A white BMW exploded around 8:15 a.m. this morning in the Penrose neighborhood. Police say they believe the blast was accidental.

The explosion happened on 9th Street South between Veitch Street and Courthouse Road. No one was hurt, according to fire department spokesperson Lt. Ed Hughes.

“It appears to be an accident,” said police spokesperson Det. Crystal Nosal. “Nothing at this point leads us to believe it’s intentional.”

The car was parked in front of a single family home, but in proximity of two large apartment complexes: Dorchester Towers and 2121 Columbia Pike Apartments. It is three to four blocks away from the high-security headquarters of the Defense Information Systems Agency.

A witness who lives in Dorchester Towers says heavily-armed police apprehended an approximately 18-year-old male on the fifth floor of the building. So far, authorities are emphatic in their description of the man — who was led away in handcuffs around 10:15 a.m. — as a “person of interest” and not a “suspect.” Witnesses say the man was seen running from the scene of the explosion.

Police say the man and two other witnesses are being questioned, but are not currently “in custody,” as earlier reported. Det. Nosal said she believes the people seen fleeing the scene were merely “running away from an explosion.”

WTOP’s Neal Augenstein is reporting that an acetylene torch had been stored in the back of the car. A police source has also told ARLnow.com that the car belonged to a worker who had an acetylene tank, used for welding, in the trunk.

A member of the bomb squad is currently examining the car for signs of other explosive materials. Arlington police and firefighters have also cordoned off the parking lot in front of Dorchester Towers. Earlier, a robot and bomb dogs searched 9th Street and did not find any other explosives.