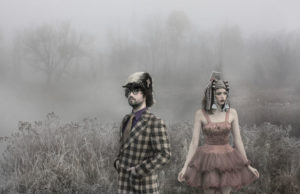 Encountering musician Sean Lennon is a bit like encountering Jesus. He performs miracles, like dating smoking hot model Charlotte Kemp Muhl, and his gentle mannerisms and humble outward appearance belie the fact that he’s the son of a deity.

(It goes without saying, of course, that John Lennon and the Beatles were considerably more popular than Jesus.)

Lennon and Kemp Muhl will be performing at Iota Club in Clarendon (2832 Wilson Blvd) tonight with their band, The Ghost of a Saber Tooth Tiger.

The GOASTT, as the group is known, has been touring Europe and the U.S. They performed on NBC’s Late Night with Jimmy Fallon last Wednesday.

The band’s latest CD, Acoustic Sessions, was released in October.